My Chinese heritage is built on blood.

Of men of honor and men of deceit.

Viewing the black and the white as

a harmonious piano melody to an

You must sacrifice parts of your life.

You must peel off your skin

And hide your thoughts within. 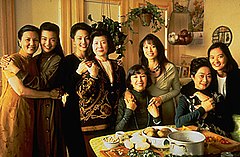 “Change your perspective” is a cliché phrase, but like all common sayings, it contains grains of truth. As the masterpiece work The Joy Luck Club (by novelist Amy Tan) masterfully demonstrates, perspective matters. Examining a situation through multiple perspectives allows for empathy for others and encourages the human bonds that bring us all together.

Confusing at times, The Joy Luck Club switches between the point of view of eight people: the four members of the club, and their respective daughters. It is a book that explains and transverses time and space. The anarchy of China in the early 20th century is explored in as much depth as the Chinese experience in America in the late 20th century. The differing perspectives allows the reader to experience the contrasts between Chinese and American culture, from the food to the vastly different definitions of politeness and mannerisms. For example, in China, refusing a gift and self-deprecation as a means of subtle boasting is considered polite. In the United States, however, such behavior is not only not condoned, but also considered unbearably rude. In addition, romantically linking several Chinese characters to American husbands further juxtaposes the differences between the cultures, yet demonstrates that bonds of love are stronger than any cultural barriers imposed by society.

The maternal dynamic, which is a main and recurring theme within the story, is also furthered by the rotating point of views presented. The childhood triumphs and tribulations of the members of the joy luck club are explored, as well as the the childhoods of their daughters. From this, the reader can spot parallels between the life stories of different generations. Each daughter has led a relatively comfortable life compared to her mother because of the sacrifices of her mother made, yet each has also had to face her own set of difficulties. The members of the joy luck club also had distant relationships with their own mothers, and this disconnect is present between their relationships with their own daughters as well, showing that some interpersonal problems persevere through generations.

Interestingly enough, when reading chapters from the point of view from the daughters, I agreed with them that their mothers were too superstitious and old-fashioned. And when I read from the point of view of the mothers, I agreed with them that their daughters were too inexperienced. Each side saw problems with the other, and didn’t recognize the problems within themselves. However, neither side was right, and neither was wrong. Most books try to paint the world as black and white; good vs. bad; purity vs. evil. Yet by presenting both perspectives, Amy Tan avoids this rabbit hole and magnifies a fundamental truth: the world is gray. There is no right or wrong; it all depends on how you look at it. 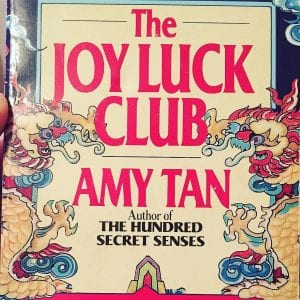 I read The Good Earth in junior high school, and it imprinted quite an impression in my mind. Like the sole window in a darkened room, it allowed me a glimpse into 20th century Chinese culture. Despite my heritage, I grew up far removed from traditional Chinese culture, and The Good Earth was an eye-opening piece that detailed the trials and tribulations of life in an era long wiped from existence but still an integral part of the modern culture of China. I read The Good Earth by Pearl S. Buck to learn more about the country of my forefathers in a time before modernization, and similarly, I chose to read The Joy Luck Club by Amy Tan in order to learn more about the country in the time after modernization. I wished to determine the impact of the passage of years, and to learn more about the country that my from where my parents hailed. I also wanted a good story.

I was not disappointed. The book introduces the elements of mystery and adventure in the first chapter with a tantalizing search for lost relatives. It then narrows down into the narratives of each of the players at the mahjong table, giving the reader an intimate glance into the early lives of four women. Having described all of the characters judgmentally in the first chapter, this loom of stories aims to break the judgement previously imposed by the author. In addition, the backstories expose the vulnerabilities of the characters, allowing the reader to relate more to their sorrows and joys. I have just finished reading the story of the fourth “aunt”: Ying-ying, and with the loom all set up, I think that the author will weave all of the strings together and explain how the four “corners of the world” impacted the lives of each other, and how their stories thread into a greater theme.

I can’t wait. The history presented in this piece is also in-depth and riveting. I couldn’t help be be awed by the differences between Chinese and American culture, and the differences of the times. Patriarchy is a running theme is all of the “auntie’s” stories, and it is amazing to see how far society has come from the ages of the past; although patriarchy is still an institution, history has brought about great change. Even though I’m only a quarter through this book, I highly recommend it. Please excuse me while I steal some time to read some more.

A poem built off of the format and themes of Invictus, a poem by William Ernest Henley

Among the moon and the stars,

Besides the wind and the trees,

I am the cut that never scars

I am the eye that never weeps.

Despite the storm and the rain

I have not taken shelter nor turned away.

Amid the suffering and the pain

I am the thought that corks dismay.

Aboard the ship that never stops

Empires pass in its foggy wake.

And yet the seed that bears the crops

Shall never touch the wooden stake.

It matters not how distant the past,

How much danger the future holds,

Dream is the call to the mast,

Dream is the substance in the molds.